The contents of the blacksmiths came largely from the Barney Brothers Blacksmiths shop at Stockenchurch. The Barney Bros. started work in about 1900. A society member living in Pitstone gave bricks from their garden wall to build the forge. It is a working forge and demonstrations are sometimes given on the Open Days. We tend to associate blacksmiths nowadays with shoeing horses but in the farming community they undertook almost any work using metal, from making and repairing farm implements to patching cooking pots. The many tools around the room were mostly made by the blacksmith himself from wrought iron. Where hardened carbon steel was required for cutting purposes, the favourite source of material was old metal files. Coke or small coal was used on the fire with the large bellows required to 'blow' the fire, giving the very high temperatures required to soften the iron or steel, enabling the blacksmith to bend, shape or when heated to the highest temperature, beat the metal together to form a 'blacksmith's weld' 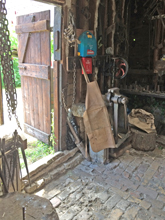 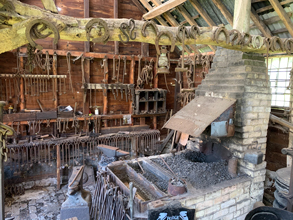 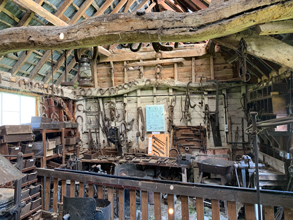 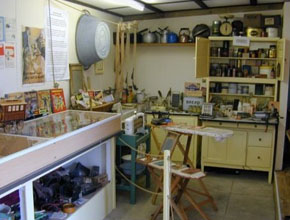 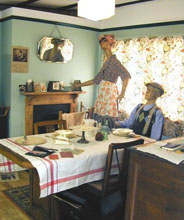 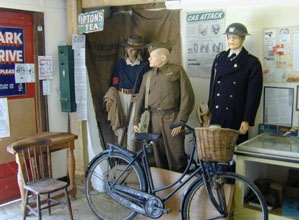 Created during the 2009/10 closed season this room has a vast display of items from the 1940's. The collection is owned by one of our volunteers and depicts domestic life during the last years of WWII and up to the 1950's. A small dining room and the contents of a kitchen of that period are on display together with personal items, documents, posters etc. 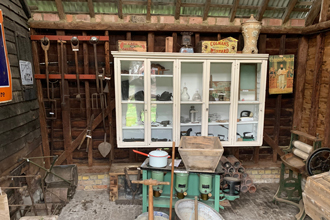 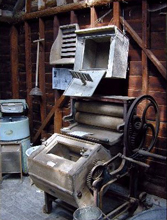 Every house had a small outbuilding or shed containing the paraphernalia associated with the house and garden, stored for convenience or used during the various seasons of the year and of course the Monday morning wash day. Little in principle has changed over the years, even if the items themselves have and their location also. One thing that has changed dramatically is that there was no modern bathroom and toilet, only a small wooden shed or privy, often at the end of the garden. A wooden seat and a bucket was all that was available. It was only just after the last war that the houses in Pitstone were connected to the main sewer so it has been quite a dramatic change in the last fifty five years. 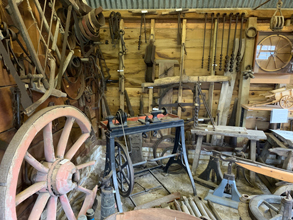 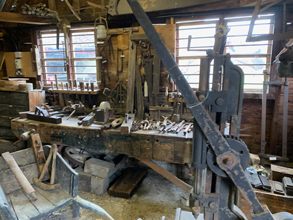 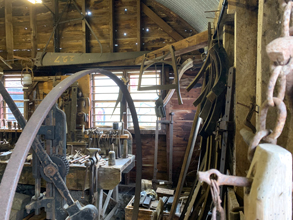 The shop contains literally hundreds of tools used by local carpenters/ wheelwrights. They have been collected from various sources, including Mr. Heady's shop at Linslade, Bucks. We have all sorts of tools including common chisels, saws, planes and spokeshaves as The village wheelwright was often the local carpenter and was expected to turn out almost anything that was made of wood.

One particularly interesting exhibit is a set of drawers containing pigments. These were ground up and mixed with oils to be used for painting the carts and wagons. Many farms or estates would have their own personalised colours, so identifying their equipment. The spokes of the wheels were fitted into a central hub, with the rim of the wheel being made up of several sections, called fellows. The large hoops lying against the exterior walls of the shop were the steel tyres that were heated to expand them, fitted to the wheel and then by pouring on water, shrunk on to the wooden wheels to give them strength and protect the wooden wheel from the road surface. 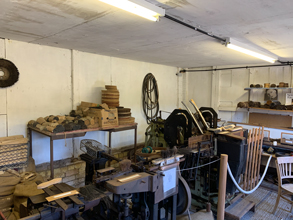 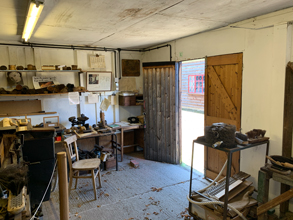 Although not strictly a country craft, Mr P. R. Walton's Leighton Buzzard Brush work specialist brushes using semi-automatic machines. This process bridged the gap between brushes made entirely by hand and those produced by fully automated machines. There was an infinite range of brushes made for almost every purpose, for example the very wide brush for removing worm casts from golf greens. 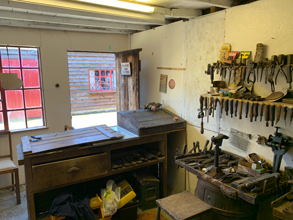 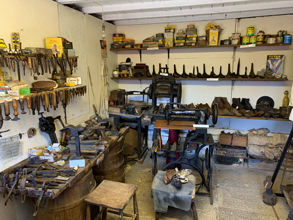 William West, the shoemaker of Ivinghoe, was the third generation of his family to be in the shoe business. The shop was located on the left, at the end of Green Lane, Ivinghoe. His family had previously worked in Tring and Berkhamsted. He set up first with his brother in Cheddington and moved to Pitstone in 1933. His papers from the first setting up of his shop were left in his desk, and were found when it was acquired by the museum, so we know quite a lot about his life. He had customers from as far away as Luton and often he sold them insurance as well as mending their shoes. He had many interests in life outside his work including wood working and amateur radio equipment. William fought in the First World War and became a special constable in Ivinghoe in the Second War. All the contents of this room were from Willie West's shop. The contents are as they were when the shop was closed. They were left in his will to the Vicar and Churchwardens of Ivinghoe and are now displayed in the museum. 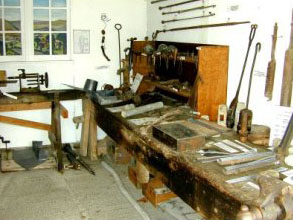 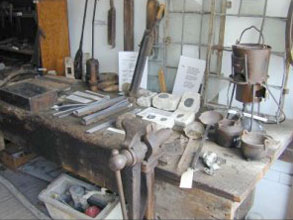 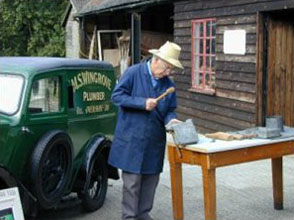 The name 'Plumber' is derived from the Latin name for lead (Plumbum), the chemical symbol being Pb. Lead has been used for many years from Roman times through to the present day. Its greatest use was probably during the 1800's and the early years of the 1900's when lead pipe was used extensively in domestic water systems. Its other use was in weather protection on roofs and guttering and also for glazing, holding the glass in window frames. It's advantages is that it does not corrode and is soft, easily worked and can be easily soldered. In fact solder itself is composed mainly of lead with additional tin. Plumbers were expected to cover all aspects of lead use and in country areas, together with the blacksmith and carpenter repaired and maintained virtually all domestic, farming and trade equipment. 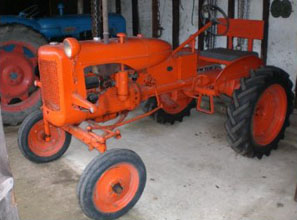 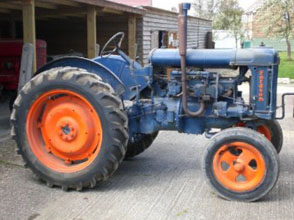 These bays were added to the 1831 farm buildings either in the late 1800's or early 1900's. The timbers were even then second hand and probably obtained from buildings that were demolished and that existed on the site prior to 1831, the date when the present farm was built. Looking at the timbers one can see slots and holes that formed tongued and grooved joints and holes for wattle and daub wall posts. Originally they were used for housing the farm wagons and carts although one bay had been used as the farm carpenters area at some stage.

The tractor sheds house the museum's tractors, some for exhibition and others as working tractors. The picture on the left shows our Allis Charmers tractor, the other is a Fordson Major. 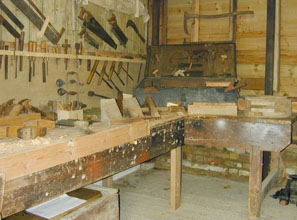 Many trades and professions used wood as their raw material with many specialising in different areas of construction. Example of these are the Cabinet Maker, the Wheelwright, the Joiner and several others. The carpenter could be considered as a general woodworker, called on to make and repair many items that may cover several trades. The majority of artefacts displayed are the more common hand tools. Two larger items of machinery, are a mortiser for cutting square holes in wood and a power band saw. 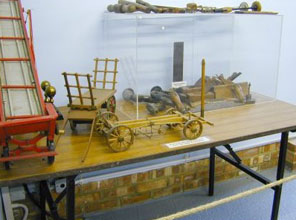 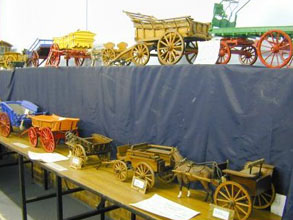 Our new models room first opened in 2008 contains the Gauge1 Model Railway layout, a large number of model carts made by local people and models by David Wray. There is also a model of Pitstone Windmill made by and donated by Mr John Vivian of Cowley, Oxford in 1982. Most of the model carts were made by Stuart Putman of Dagnall and Horace Fiddler of Cheddington.

The Much Hammering Gauge1 Layout

Much Hammering Gauge 1 model railway layout was built in the mid 80s by members of the Chiltern group of the Gauge 1 Model Railway Association, an international association for modelers of Gauge 1 trains, known as the Premier gauge it uses a track gauge of 45mm. The majority of the members run live steam locomotives in their gardens. Members of the Chiltern group wanted to demonstrate and promote Gauge 1 to the public at model railway shows. There already existed a large main line layout that featured long steam hauled express trains which, due to its size was only exhibited once a year at a national model railway show, this layout took around 20 plus members 5 days to erect.

Much Hammering used electric locomotives and represented a typical British country branch line terminus. 5 or 6 people could erect it in a few hours and it was small enough to visit many exhibitions which it did throughout the late 80s and the 90s, winning many prizes in the process. Being electric it was more acceptable to exhibition managers in these perhaps over cautious times! Sadly the membership wasn't getting any younger and enthusiasm waned as the Millennium came and went.The layout needed around 5 people to operate it and the Chiltern group approached the Pitstone Green Museum to give the layout a permanent home. The Museum originally housed the layout in its short form in the Nissen hut.

Over the winter 2007/8 the museum volunteers purpose built a new building to house the layout at it's full length and the railway has been running there since the beginning of the 2008 season. Ownership of the layout was eventually passed to the museum and a complete rebuild of the two extreme ends of the layout undertaken. The operating system was changed to Radio Control only making it easier and more reliable to operate. We are always looking for more helpers to run Much Hammering and welcome additional locomotives